Responsible women will not fall in love with you. 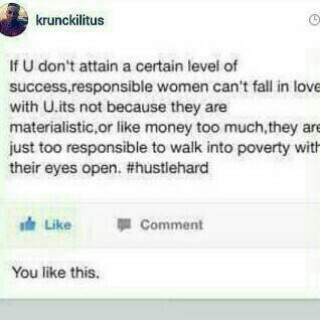 Responsible women can’t and won’t fall in love with you if you’ve not attained a level of success.
It’s not because they like money nor because they are materialistic.

How does this not even make sense?

It doesn’t take a genius to drive home the point of what’s behind being successful.

Success, simply put, is the achievement of one’s goal.
Whereas in terms of money and material wealth, Financial profitability.

To be a responsible person, it means you can take and handle your responsibilities. It involves a certain degree of accountability on your own part.

We need to address some issues with a little depth of understanding.

You cannot be responsible completely without being successful. This is not even debatable. Because it makes sense. In a way. Hence, for a woman to be referred to as responsible, you ought to have had your own share of success.

So for a well-to-do woman to opt for something much better rather than go for less is regarded as being a gold digging act? In this age and time ?  Seriously?

I believe it’s all about knowing what you want. Really. Setting your standards. Having a goal. Not settling for less when you know you can have more. Being responsible enough for yourself and your family.

A young wise man once told me, “If a woman can’t fall in love because a guy isn’t successful, it just means her own expectation of success has not been reached by that guy“.

Don’t get me twisted, I am not saying there aren’t no responsible women who are not willing to start from whatever scratch there is with their Man. This is reasonable enough. It’s been one of our many ideologies since time immemorial.

‘A woman who suffers with and helps in the building up of her Man will be held in high-esteem forever and ever in her husband’s house..’ blah blah.

That must have really worked too well in our ancestral time and down the line. It’s still working, apparently. Atleast, for some stoical and admirable women out there today.

They’ve forever been telling us that ‘all that glitters is not gold’ . We know this. And Yes, we’ve confirmed it. 🙂

We need to understand that we aren’t all the same. We can’t always see things the same way. The fact that a lady wants an already-made man doesn’t make her any lesser of a good woman than one who helps with all the Catabolism aspect of her Man’s life. It means she knows what she wants and she’s going to go for it.

She can’t and won’t settle for less because she has really worked hard grooming herself to become a reputable and responsible woman.

This is not for or against anyone. I just wish people would stop generalizing the fact that if you want any ready-made material, it means you lack foresight about what the future might hold, like they would say and you’re nothing but a materialistic and parasitic human-being.

Sometimes, you just won’t want something because you can’t. It’s only fair enough to respect other people’s opinions and decisions on what they want and don’t want in life.

6 thoughts on “Responsible women will not fall in love with you.”